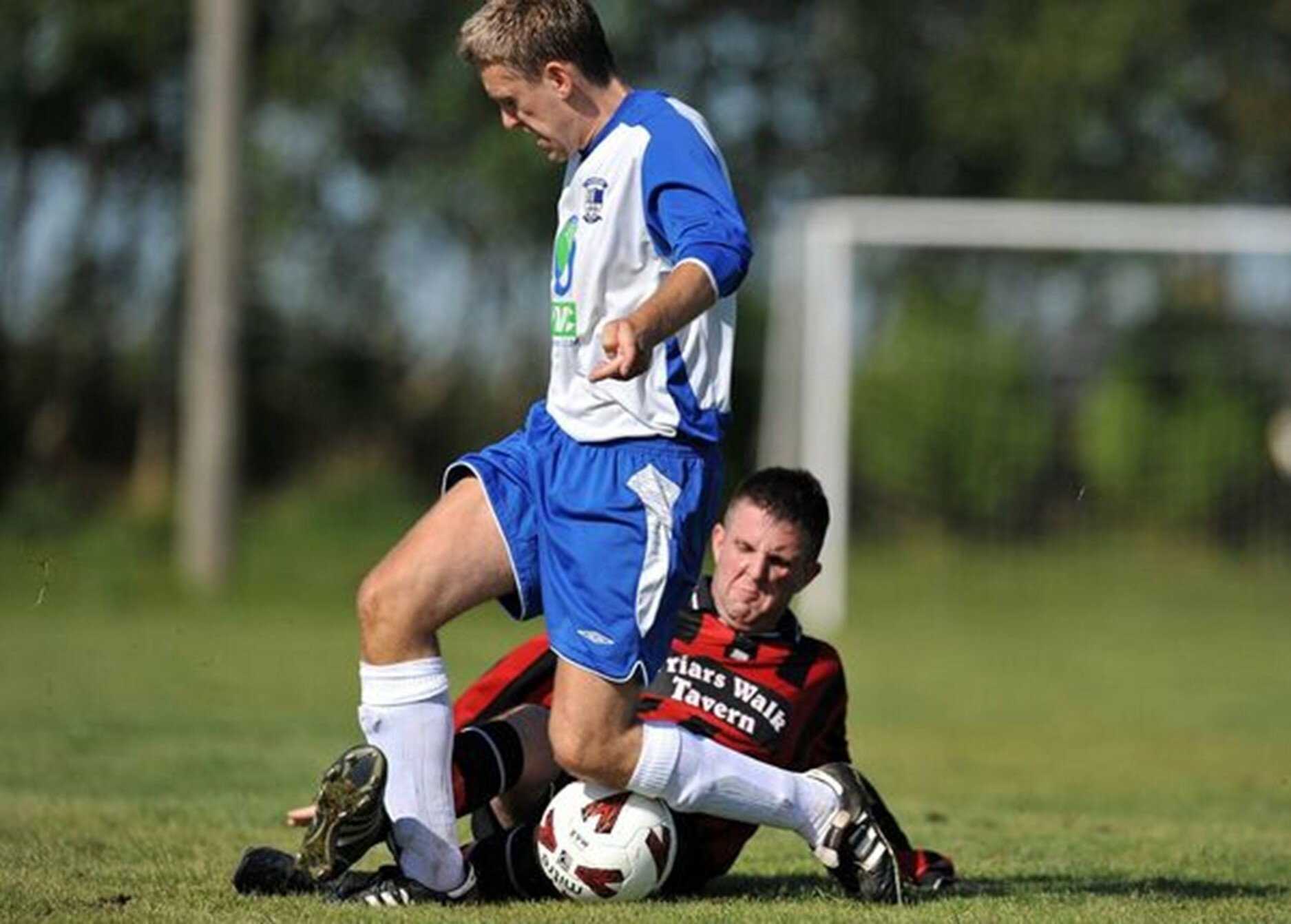 Published: about 2 months ago

Download our mobile app to hear more about Ballinhassig AFC.

Jason has played his entire club football with Ballinhassig and has enjoyed much success along the way. From captaining the side to victory at the Cross in 1999 in the County Cup, to winning promotions and getting to numerous finals, McCarthy proved a pivotal player for Ballinhassig.

“Jason demanded so much as a player and as a coach, but he gave so much in return and we are lucky to have his loyalty at our club” These are the words of former Ballinhassig chairman Dáire Coughlan on club stalwart Jason McCarthy.

Although he received offers to play for other clubs at a higher level, he showed huge loyalty to the club down the years.

“Ballinhassig didn’t have much of an underage structure in the mid-90s so I only started playing when I was 16. Thankfully the club now has a much better underage set-up with some promising girls and boys coming through. In 1996 at the age of 17 I was asked to join the men’s team by the manager Spud Murphy and was delighted to do so. I have stayed with the club ever since.”

His loyalty was lauded by Coughlan. “I know him for over a decade and his level of professionalism and seriousness was second to none,” said Coughlan.

“His camaraderie, support and loyalty off the pitch was a huge attribute. There’s no doubt in my mind that Jason would have had offers over the years to leave Ballinhassig and play for other teams in higher divisions however he always stuck it out, stayed around and helped out the club and kept it together. He was a leader in that regard. Then the younger generation such as Kevin Walsh looked up to Jason and saw that loyalty and Walsh probably had similar opportunities to play for a bigger club but fair play they showed their loyalty to the club and that’s why people in the club like Jason are invaluable to us. He has a huge influence. Professionalism and loyalty are huge attributes of his. He was my captain for a few years and alongside him in midfield was Michael Ahern for over a decade, both of whom formed the nucleus of our men’s teams probably since 2000.”

After almost three decades with the club, an injury put a halt to Jason's playing career and while he didn’t expect to play again competitively, last 2021/22 season he lined out for Ballinhassig juniors and thoroughly enjoyed it.

“I had no intention of playing this year. About five years ago a herniated disc in my back finished my season early," explained McCarthy. "I attempted a couple of times to build up my fitness to continue playing senior league only for my back to flare up each time so I resigned myself to the fact that I’d only be able to play five asides and non-competitive games. In January, the junior team were in a difficult position in the table and changed management. They were taken over by Mark Dooley and Ray Kearney. They brought in a couple of young lads and asked me to sign to help out as much or as little as I could. I was reluctant at first as I didn’t think I could contribute much. Club legend and good friend Mick Ahern who was playing told me that I would enjoy it and that there was a good bunch of lads there. I signed and quickly saw that there was a good tight-knit squad who were fully committed and had quality. The new management brought in a little bit more organisation and structure and fortunately we started a great run of results, winning seven games on the trot, all but one by a 1-0 margin and picking up a team of the month award along the way. We comfortably avoided relegation and I ended up playing more than I thought I would and by the end I really enjoyed it.”

While unsure of what next season holds for the father of two, McCarthy is grateful to a club that has progressed through the years because of the great people involved.

One of the things I’m most proud of is the fact that a small rural club like Ballinhassig has managed to compete year in, year out against heavy populated big towns and suburbs without ever folding. There were years where we struggled but managed to finish the season and keep our status as a senior league club. About eight or nine years ago our junior team were in the midst of a successful run in the AUL where they were winning cups in Turner's Cross and competing for leagues, whereas the senior team was struggling to survive. To the great credit of the junior team management and playing squad, they made a decision to amalgamate with the senior set up to maintain the club's senior status. The great thing now is we finally have underage teams who can produce players into the future and help sustain the club. This is the first proper year where we have seen young players graduate from our underage to play senior and junior adult football. I’m very proud to say that I was able to coach some of those guys and help them get to the point where they are representing the club in adult football. For a small club like us, that is vital.”

Opportunities to help and to learn

Are you interested in social media and digital marketing...

To comply with Cork Soccer Leagues Directive and Insuranc...

Nice letter from Brenda Moriarty, principle at Colaiste a...

Keep up to date with these handy links to websites contai...

Big shout out to Cork County Council @Corkcoco for our re...

Congratulations to Marie McCarthy who picked up the winni...

Get live information for Club on the ClubZap App